Claustral Canyon is one of the most impressive canyons in the Blue Mountains, and indeed, anywhere in Australia. Three abseils through the dark Black Hole of Calcutta are followed by 700m of high quality canyon.

It was discovered by SUBW parties in the early 1960s but the waterfalls were first descended by a Kameruka Bushwalking Club party in 1963, after placing a bolt on the blocked up keyhole.

The NPWS requests that canyoners use the entry route that starts from Bells Line of Road on the SW side of Mt Bell, via the gully that runs in a SSE direction roughly S of Mt Bell. The NPWS also requests that canyoners returning from the Camels Hump use the old track across the Camels Saddle to the minor saddle, and down into Claustral Brook, rather than forming new tracks. The notes below describe these routes. These are shown roughly on a map.

Drive west along Bells Line of Road and park at a large pull in area on the left at MGA583847, just after the road swings sharply right just past Mt Bell. Walk back to the corner and pick up a track heading generally SSE and into the gully at MGA588839. There is a burnt log book holder about 10m off the road. The track crosses the top of a massive rock outcrop about 100m from the road. Follow the gully down to Claustral Brook.

Turn right and walk down the creek for about 10 minutes to the start of the canyon.

The canyon starts with a climb down on the right, or slide/jump in on the left (only if the water is very high) of about 4m, usually with a swim. Not long after is another short (2m) jump in, and another swim.

Shortly after, scramble steeply down to the top of the abseils. The first of these is 10m, through a hole. There is a convenient ledge to unclip on - a 17m rope reaches the ledge. After a swim across the pool, the second abseil follows, also 10m, from ring bolts up high on the right. The third abseil (15m) also goes through a hole (the Keyhole, unless the hole is blocked, in which case you have to swim across the pool and go over the top). All of the abseils have ledges that you can detach the rope from before getting wet. A short swim follows, and then a wade, through a deep dark section, to the junction with Ranon Brook.

700m of the highest quality narrow canyon brings you to the Thunder Gorge junction. If you have time it is worth visiting Thunder Canyon from the bottom.

The creek opens out for about 500m before narrowing again. There are some tricky climb downs in the next section. There are also two longer drops of about 5m each, which often have fixed ropes in place. It is advisable to abseil the first of these drops on the right side, from a bolt anchor. The second is easier to climb down on the left, but this is dangerous in high water, and should be abseiled on the right hand side in those conditions. In between these two drops is the Tunnel Swim, which can sometimes be a wade, but is usually a long cold swim up to 50m through a dark tunnel.

About 50m past the second climb down, Rainbow Ravine is a reasonably obvious sloping waterfall that comes in on your left, as the creek bends right. A further 50m past this there is a final 20m swim to the exit gully. Many parties miss this exit and end up being benighted in the canyon, so be careful.

Scramble up the exit gully for about 20m and then traverse left under the cliff to Rainbow Ravine. Do not continue up the initial exit gully, as it becomes steeper and more dangerous. Follow narrow ledges around to Rainbow Ravine and head up. There are a few tricky scrambles, and some wades (for those who carry dry socks or shoes).

Where the gully splits higher up, head up the left branch. At the waterfall at the top, walk to the right along the ledge under a small cliffline to the other gully until you get near the creek, and then up a ramp to the left and back over the top to the left gully.

The old route used to continue straight up the left gully via a couple of scrambles, but this is discouraged due to erosion above the waterfall.

From there follow the obvious track up to the Camels Hump. Head down and right to the Camels Saddle, ignoring tracks off to the left, and then up a short way to the next minor saddle at MGA597834. Turn left here, and follow the track steeply downhill until you reach Claustral Brook. There are metal signs pointing the way at two points.

A track can be followed alongside the creek for some way. There are a couple of scrambles and wades before Dismal Dingle comes in on the right. Past the junction with Dismal Dingle, there are a couple of canyon sections, which may involve short swims - though skilled canyoners may avoid these by judicious scrambling and bridging. Shortly after the last of these you reach the exit gully on the right at MGA589837.

Head up this gully and back to the car via the route that you came in.

An excellent canyon, or series of canyon sections. The part between Ranon Brook and Thunder is absolutely superb, similar to Rocky Creek. There is a significant amount of scrambling in the canyon, and out the exit, which should not be underestimated. Keep this in mind if you are taking beginners.

The exit is also quite long. It is likely to take the average party between 3 and 4 hours from near Rainbow Ravine back to their car.

If you have a large group it is wise to bring three ropes of appropriate lengths and send an experienced abseiler down to rig them all. Otherwise it can be quite cold waiting between abseils. 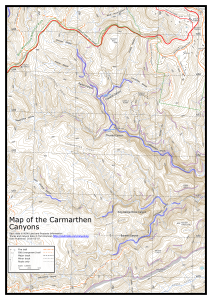