From Cathedral Reserve, follow the track that reaches the Wollangambe at the Big Bend. This starts by heading north up the hill from the NW corner of Cathedral Reserve. After passing through a gate, continue up the hill on the fire trail, before heading left, and left again at junctions. At the next intersection take the right branch to the north, down the ridge. When you reach a large clearing, take a foot track to the left. Follow the track all the way down the ridge, with a little bit of scrambling in the last section to the Wollangambe.

Swim across the Wollangambe and climb up the gully on the other side. There is a climb of about 3m which hopefully has a fixed line hanging down. Once above this climb head left and around along a ledge above the Wollangambe. The track shortly heads up to the main cliff line.

Head right, and up through a break in the cliffs and up the ridge. Drift off the left side of the ridge and into the creek at about MGA570928.

As an alternative entry lower down, if you head left instead of right at the main cliff line, a vague track goes for some distance around the base of the cliff line until it reaches a creek crossing. This point is the top of the 4th abseil, so you could use this as an early exit too.

The first drop is about 8m from a tree, overhung a bit at the bottom. After a walk down the creek, the second is also about 8m from a tree, with an overhang near the top. The third abseil is a little under 20m in a couple of stages. There is a tricky overhang at the start, and then it goes through an arch and over another overhang near the bottom. The next abseil is only about 8m again, but with the anchor set back, it's about 16m. This brings you into the main creek.

The fifth abseil is from a tree, down between two angled rock faces to an overhang - about 8m. The next is from a tree anchor a long way back, over a chockstone and then an overhang. The abseil is only about 10m, but it is about a further 7m to the anchor. The seventh is down a narrow 10m slot from a chockstone near the edge. The last is about 10m down the Waterfall of Moss, though the anchor may be some way back.

All bar the last abseil have overhung sections, and the overhung sections are rarely easy. A lot of the abseils also have potentially tricky pull downs, so it is important that the last person down sets the rope to minimise any difficulty.

Swim down the river for about 200m to the point where you reached the Wollangambe on the way in, and follow the track back out.

Waterfall of Moss is a nice trip but not a great canyon. Most of the abseils have overhung starts so it is not a good choice for beginners. 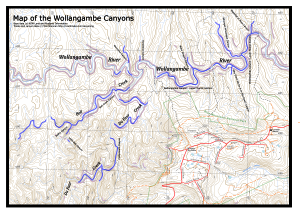