Tiger Snake Canyon is a narrow, twisting tributary of Deanes Creek, in the South Wolgan area. It features two constrictions. The lower is deep, dark and spectacular, and was discovered on a joint SUBW - Ramblers trip in September 1977. The upper constriction was discovered later on a Ramblers trip. Some of the first party were trapped by a tiger snake in the chamber below the keyhole and the rest of the party were forced to throw clothes on it to allow them escape. Tiger Snake is particularly popular as a winter trip as it is a relatively dry trip.

See Newnes Plateau and South Wolgan Fire Trails for information on how to drive to the starting point. From the Old Coach Road car park, head along the fire trail to the east. After about 200m it turns roughly north and follows the ridge for about 3km. Near the end it turns into a foot track, and slides off the east side of the ridge down to the start of the creek at MGA439210 (AMG438208, Ben Bullen). Note that a faint track comes in from the right a couple of hundred metres down the hill - this is the exit track. Following the creek for about 200m brings you to the start of the canyon

The first abseil/downclimb is only 5m but is very tricky and awkward due to the narrowness of the crack, and how quickly it descends. Abseiling by just sliding down in the crack is possible, but you are likely to grater yourself. Climbing is usually the best option and is quite straightforward if you bridge out some way, as there are good footholds. There is also a high anchor on top of the pagoda to the right.

Then there is a 2m climb down into a shallow pool. It is possible but risky to climb around the pool to the left to avoid getting your feet wet altogether.

The next drop is from dodgy looking logs across the canyon. The ring that used to be in the wall has been removed. It is an easy 5m drop into a pool. Alternatively this can be bridged fairly high, with a bit of scrambling.

A squeeze through a narrow crack follows, then a 3m abseil from a tree, or downclimb the roots. This brings you out on to a wide ledge with a 17m drop. The abseil is very easy from a sling around a tree - there is a 10m overhang.

A relatively easy walk downstream follows, for about 500m, to the bottom section of canyon.

There is a 6m abseil over a small chockstone from slings around a large rock. The chockstone has been worn away and the rope will almost certainly get stuck in the groove on the right in the pulldown. It is difficult for the last person to manoeuvre the rope over to the left on abseil - they may need to stop and use prusik loops to adjust. Alternatively you may be able to position a log so that the rope runs more to the left.

There are no more abseils, but a few easy scrambles in the dark to the end.

Rather than do the 6m abseil, the majority of parties go over the top on ledges above the left of the canyon, as the abseil from there is better. After a short distance you will see a bridge of rocks over the canyon. There is an obvious sling there, or cross over and follow the canyon further down on a narrow ledge to the right for about 10m to another set of slings. These both give about a 25m drop, and come down near the middle of the bottom section. You can then scramble upstream to see the top of this section.

Once the canyon opens up, continue down the creek over boulders and follow the cliff along to the right.

It is an easy scramble up the first obvious spot to your right, about 200m from where the canyon ends. From here head up the hill and right along a track below the next line of cliffs. This crosses a few small gullies and then heads up through another small line of cliffs. At the top, climb a pagoda to the right and continue generally west and up until you reach the track you came in on at about MGA437209 (AMG436207).

Tiger Snake Canyon is an excellent trip, and a very popular one even in winter as there are no swims, and the deepest wade is usually no more than knee deep. You can keep your feet dry, but it is somewhat risky. There are a number of abseils if desired, although apparently the entire top section (including the last big drop) can be scrambled. However, avoiding the big drop involves an exposed scramble and is not recommended (unless you don't have a rope!).

Tiger Snake is a good canyon in all weather as the creek is very small. It is also a good canyon for novices as the walk in is relatively short and the canyon is not technically that difficult. The constrictions are very good. The lower one is particularly notable for how deep, dark and narrow it is. 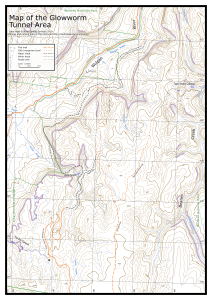