Heart Attack Canyon is a good canyon in the lower reaches of Rocky Creek. It starts with an impressive 30m+ abseil into the canyon and continues for some way.

It was first identified on an NPA bushwalk led by Ted Daniels in 1974, and subsequently descended in January 1976. It received its name as the party was woken on the steps of the Bell Cafe by someone looking for a phone to call for help for a heart attack victim.

See Newnes Plateau & South Wolgan Fire Trails for information on how to drive to the starting point.

Note that the new topographic maps do not show most of the old fire trails, so use the South Wolgan Canyons map available for printing from the website.

From the locked gate for the Deanes Lookout Trail at MGA463143 (AMG462141, Rock Hill), follow the fire trail N for about 1.8km to a junction. Turn right on to rough fire trail crossed by many logs and fallen trees. Follow this for 2.2km to another junction at MGA467180 (AMG466178, Mount Morgan). Head NE along the fire trail to the right, which passes a small hill called Murrays Mount at MGA472186 (AMG471184). This area is basalt and was the site of an old farm. Continue along the trail E and then SE to the end, and then make your way down into the creek, possibly with an abseil.

An alternative route leaves the fire trail at a clearing and bend in the track about 300m past Murrays Mount, and heads N along a ridge, E down to a saddle and up to a hill, before heading down the creek that joins Heart Attack Brook at MGA486188 (AMG485186). On the right of the creek you can do a 40m abseil down the main cliff line. 50m+ ropes are recommended to get enough angle on the pull down. Because of the length of the abseil, most parties will probably find this slower.

Either way, head down the creek to the start of the canyon.

The canyon starts with a spectacular abseil of up to 35m at MGA486191 (AMG485189). This can be done from various places but the big chockstone 20m downstream provides an easy pull down, and is about 32m. The side canyon 150m downstream on the left can also be used for shorter drops to enter. After this the canyon opens out slightly into an excellent gorge for a while before narrowing further. There are a number of tricky climb downs, for which some parties may need a rope. There is a final tricky 9m abseil near the end. There are typically a number of short wades, mostly to waist deep but possibly deeper at times.

After the canyon ends, head downstream for a few hundred metres to the next major gully on the left at MGA485197 (AMG484196). This provides an easy exit back to the tops. Climb the hill to the NW and follow the ridge back to the fire trail.

Heart Attack is a very good canyon, but with a long walk in and out. It is a fairly long day with around 16km of walking. Mountain bikes are possible though the legality of their use is questionable. If used, you would be better to continue along the Deanes Lookout track to the clearing. Wetsuits are not generally required. 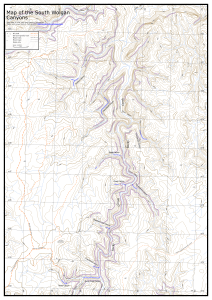